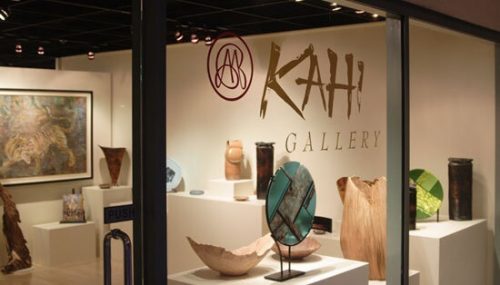 Kahi Ching was born in Honolulu, Hawaii.  A true child prodigy, he began drawing and painting at an early age.  He had been sponsored with art classes at the Honolulu Academy of Arts, and was amongst adults in life drawing class.  He was enrolled in private studio lessons with instructor Larry Roberson.  All the fore mentioned while selling his very first painting at age 11.  At age 16, Kahi entered an art contest for the very first time.  He took second place at the Industrial Arts Fair with his first attempt at copper sculpting.  Kahi took on many, if not all, of the art projects that came his way during school, including set painting for the theater working alongside Ron Bright.  He was the first student to paint two large-scale murals on the walls of Castle High School.  At age 17, Kahi submitted 8 images to the 53rd Annual Scholastic Art Awards competition.  He took home four gold keys and Best Portfolio at the State Level and was sent to New York to compete at the National Level.  Kahi won a Hallmark Honor Prize for his pencil drawing entitled, “Curios” and a scholarship to Rudolph Schaeffer School of Design in San Francisco.  He also attended The School of Holography, San Francisco.

Upon Kahi’s return to the islands, he continued with his art and ventured into different fields, including construction, concrete furniture, jewelry, bonsai, and sign painting, all of which have contributed to his engineering of special art projects.  Kahi faced occasional criticism for venturing into different venues of art – painting, ceramics, and wood sculpting, just to name a few. He had a long-term battle within himself with the idea of conforming to the notion of conventional art and became conscious of the fact that creating art that comes from within himself is most meaningful to him as an artist rather than to please someone else (although if that someone else appreciates his vision, that’s a bonus!).   With that said, Kahi continues to challenge himself with new mediums in addition to mastering the primary, and that is simply Kahi’s “style”.  He “disappeared” from the “art scene” and laid low from the radar and continued to do his signature pieces, which, for the most part had been barely untapped until today.

With an entrepreneurial attitude and over 30 years as an artist, he created Kahi Gallery (2006), an extension of his own artistic and technical vision, a place where he could share his and others’ artwork to the public.

Wanting to return to producing artwork full-time, Kahi went back to the studio–this time reigniting his fervor for the art of bonsai, wood and public space art.

Today, Kahi balances time between his family and his craft.

Cell
https://www.kahiching.com/
Back to directory