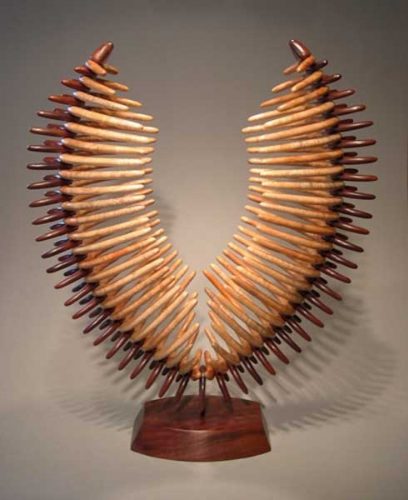 Michael’s interest in art began as a young boy growing up in Chicago. He attended the University of Cincinnati as an industrial design student but left after three years, discontented with the formality and lack of freedom the design business allowed.

Michael moved to Hawai‘i in 1981, and spent ten years traveling throughout Asia, buying and selling antiquities. However, the allure that art had always held for him crept back into his life when he attended several local wood shows in Hilo and was instantly attracted to the turned wood. The idea of taking a segment of a tree and spinning it to form, hollowing and finishing it: that was something he had to do for himself. He followed the woodworking scene for the next few years and saw a transition in wood-turning design. Basic bowl shapes were starting to break the boundaries of tradition, hinting at what an art form the craft could become. He researched woodturning, talked to woodworkers, worked with another woodturner, and finally began to turn his own work.  Although Michael is relatively new to woodturning, he has received recognition in all the juried wood shows that he has entered, including two first-place awards in the statewide Hawai‘i Forest Industry Association’s Hawaii’s Woodshow.

“From the beginning, it was my quest to find what form or style that would be recognized as mine; what would separate my work from the others. It took a while to come full circle and realize that my greatest asset is my versatility. Whether it be burning, artwork, carving, relief work or just pure form, my desire is that as each piece evolves, it will be unique, artistic and beautifully executed.”